Jazz guitarist Coleman Mellett was traveling from his home in New Jersey to Buffalo, NY to perform with Chuck Mangione’s band when his plane crashed during its landing approach on February 12, 2009. The 34-year-old whose talent had astonished everyone who encountered it—which was many, as Mellett was also first-chair guitarist for the legendary dance troupe the Rockettes—was silenced forever. 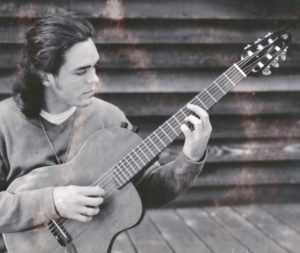 Fortunately, he had left behind more than a mere echo. Mellett had for a decade been writing and recording an album of original songs that would introduce him to the world as a phenomenally gifted singer-songwriter in a jazz-pop mode. His widow, jazz singer Jeanie Bryson, and collaborator, Grammy-winning pianist and producer Barry Miles, were determined that album be completed: “I can’t imagine people not hearing Coley’s music,” Bryson says. “He needs to be heard.” Sing You a Brand New Song—which also features the work of keyboardist Larry Goldings, bassist Will Lee, and drummer Steve Gadd, as well as special guests Chuck Mangione, James Taylor, and Bryson herself—thereby stands both as the capstone of Mellett’s all-too-brief career and as a loving monument to him erected by his most ardent devotees. (Bryson also teamed with Mellett’s brother, Zeb, and Oscar-nominated film veteran Bob DeMaio, to produce Sing You a Brand New Song: The Words and Music of Coleman Mellett, a companion documentary that has won several awards at film festivals around the United States.)

Miles had already been contributing keyboards to Mellett’s tracks in progress—but only for a short time. Nevertheless, Bryson was certain that this was the person to finish her husband’s recording. “Barry Miles is a genius,” she says. “And he had already been seeing eye-to-eye with Coley about the concept. They only had like a month to work together, but a great deal of discussion was going on in that month.” Thus it was that just three weeks after Mellett’s passing, Miles (and engineer Ron DiCesare) came to his and Bryson’s home and collected the computer on which he kept his digital recordings.

The music they found there was a remarkable document of Mellett’s gifts. It comprised ten original compositions of great warmth and optimism, written in pop-song idiom but treated with the sophistication of a musician fluent in the jazz language: reminiscent, perhaps, of a Michael Franks or Steely Dan album. Mellett also evidenced an appealing alto singing voice and a startling command of written lyrics, all the more so considering that they represented his first attempts at the craft.

Miles spent over a year sorting through hundreds of files—in various stages of completion, recorded in various formats and on various audio platforms as the technology evolved from 1999 to 2009—and assembling basic tracks. “If it wasn’t for Barry, none of this would have happened,” says Bryson. “His main focus was to make sure that this record sounded like Coley was still here. He figured out what pieces of every song were what Coley wanted, and melded them together. It’s unbelievable how he did this: It’s just magic.”

For “Digibob,” Mellett’s mellow musing on life in the digital age, the guitarist had completed (as one of the project’s earliest efforts) two tracks that were not only out of sync with each other but were in a file format that was incompatible with contemporary audio-production software. Miles was somehow able to edit them together and complete production on them. Another early recording, Mellett and Bryson’s vocal duet on the slightly funky “You Got Me Too,” had been captured in a low-quality recording with a different band; Miles extracted the two vocals and Mellett’s guitar, polished the fidelity, and added new accompaniment from Goldings, Lee, and Gadd.

Then there’s “Island Home,” which existed only as a 57-second snippet of Mellett playing guitar and singing the lone verse. “I loved it so much that I wanted it on the record, but it wasn’t complete,” Bryson recalls. “Barry figured out how to extend it with an instrumental section, where he traded trade fours with him on the melodica.” Now two and a half minutes, its plaintive sweetness serves to close the album.

As impressive as Miles’s ingenuity is, however, it’s Mellett’s talents that are at the center of Sing You a Brand New Song. The allure of the gently rolling opener “Everymornin’” is immediate, bright as it is with the singer-guitarist’s sunny disposition. His contagious cheer is also apparent on the (slightly) harder-edged “Rainy Days,” which also features some of Mellett’s most fluid and sensitive guitar work, and the determined bounce of “Morning Line,” on which he is beautifully complemented by Miles’s piano and the flugelhorn of his former employer Mangione. James Taylor contributes backing vocals and rhythm guitar to “Come On Home,” brought into the fold precisely because of the song’s Taylor-esque aspect.

Taylor also authored the album’s only cover tune, a stark and highly emotional solo guitar rendition of “Fire and Rain.” This was not among the pieces Mellett intended for his album—indeed, no one had known it existed until DiCesare found it while sorting through the files. “Coley was working on solo guitar pieces, separately,” Bryson explains. “He had arranged to play solo guitar Wednesday nights at a restaurant in New Jersey, so he was working out stuff for that gig.” The beauty of the piece, coupled with the serendipity of Taylor’s appearance on Sing You a Brand New Song, secured its place on the album.

Miles completed the album in 2010; Bryson, however, held off on releasing it until the companion film was also complete. This ended up being a nearly ten-year process, thanks to a midstream change in creative direction (and some attendant production delays). Sing You a Brand New Song finally premiered at the 2019 New Jersey International Jazz Festival, where it won Best Documentary, before going on to win the Audience Awards at both the Virginia and Niagara Falls film festivals. “After the screenings, everybody was clamoring: ‘Where’s the CD? Do you have it?’” Bryson says. “I didn’t yet. Now, though, we have it in place and can share Coley’s music with the world.”

Coleman Mellett was born May 27, 1974 in South Natick, Massachusetts, and grew up in the Maryland suburbs of Washington, DC. He began playing guitar as a young child, quickly acquiring a passion for it that bewildered his siblings: “When it was time to go play outside together, he would sometimes rather stay inside and play his guitar,” says his younger brother Zeb. He soon decided that he would be a musician, and by ninth grade had settled on jazz in particular.

After earning an undergraduate degree at William Paterson University, Mellett moved on to the master’s program at Manhattan School of Music. He used MSM as a conduit to the New York jazz scene, getting to know the musicians and other industry professionals, and becoming a freelance guitarist. In 1996, while performing at the Cape May Jazz Festival, he met Jeanie Bryson—a jazz singer and the only child of singer Connie Bryson and jazz icon Dizzy Gillespie—with whom he began a partnership both professional and personal that would last the remainder of his life. (They married in 2004.)

In 1999, Chuck Mangione’s wife saw Mellett playing on cable-access television and recommended him to her husband, who auditioned and hired the guitarist and continued employing him for the next decade. In 2008, Mellett also auditioned for and won first guitar chair for the Rockettes, the resident dance company of New York’s Radio City Music Hall. He also continued working with Bryson, worked as a freelance accompanist on the jazz scene, and in 2007 recorded a solo guitar album, Natural High. Mellett was hard at work on his second album, which was to include recordings he’d made since 1999, at the time of the accident that took his life. (Multi-reedist Gerry Niewood, a friend and Mangione bandmate of Mellett’s, perished in the same crash.)

Bryson and keyboardist/producer Barry Miles decided to complete production on the album, which became Sing You a Brand New Song. The process was documented in the film of the same name, which an acquaintance called “A love story of a film.” “I hadn’t really thought about it that way, and didn’t intend to do that,” says Bryson. “But it really is a love story!” Mellett’s original songs, then—many of them paeans to love and domestic contentment—were his love letter back to Bryson; the album, between his creation and her determination to see it through to completion, is their love letter to each other.  •